How to Avoid Gluten Cross Contamination 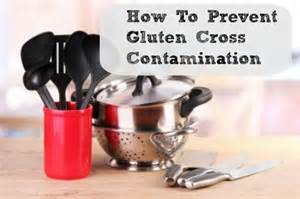 How To Prevent Cross Contamination

Below is an excellent video on the effects of gluten cross contamination. Take a look! 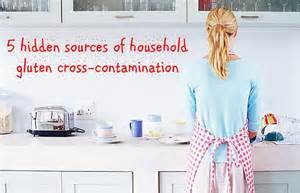 This is the main area where most of the contamination can happen. Why? Because it’s the room where the meal planner prepares both the gluten and gluten free meals in.

As you can see, the kitchen is the hardest and the most difficult area to keep from being contaminated with gluten.

The next area of concern is the utensils the whole family uses to eat from. You may need to have separate utensils from the gluten ones being used by other family members. It’s important that you convey to the other members of the family about cross contamination and its effect on gluten free individuals. Don’t forget the utensils you also use to cook with they should be separate as well. Or, be sure to wash them thoroughly with soap and water before using them when preparing gluten free meals.

Consider the silverware tray as it may have some hidden sources of gluten. You may consider storing the gluten free silverware in a separate tray and storing them away from the gluten ones. Here are some other items that may cause contamination that you should consider: the can opener, bread board, wooden utensils, toaster and toaster oven. Be sure to have separate ones of these kitchen aids for gluten and gluten free food preparation. Or, be sure to thoroughly wash them with soap and water before using them with gluten free foods.

The next area is the actual cookware being used to cook all the meals in. It may be in your best interest to have separate pots and pans for both gluten and gluten free food groups in the home. This is so you don’t get mixed up on which ones had gluten in them with those that did not. By having separate pots and pans will make it easier for the preparing of all the meals for both groups and help prevent cross contamination.

Many restaurants now offer a gluten free menu items for their customers. Just because they offer gluten free entrees it does not necessary mean that the meal being served to the one with celiac disease or gluten sensitivity can eat the meal safely. It’s quite possible that it may be contaminated with gluten.

How is that, you ask? The chef may not have washed his hands after preparing a gluten meal, forgot to wash any of the pots, pans or utensils before preparing the gluten free meal. The server who brings the food to the table may have touched something with gluten in it and then proceeds to touch the plate and takes the plate of food to the gluten sensitive person.

There is no harm in asking the waitress if she and the chef washed their hands before preparing and the serving of the food to ensure no contamination has taken place.

Another area of concern which may be more difficult for the younger children in the family with celiac disease or gluten sensitivity is foods being eaten or exchanged from friends. Tell them not to accept any food that is offered to them or exchanges from their friends. The reason is they do not know how the food was prepared or where it was sitting and it’s possible it may be contaminated. To play it safe, just tell your child not to accept any food from friends at school or friends in the neighborhood.

Can I Prevent Cross Contamination?

It is probably almost impossible to prevent cross contamination at all times. However, with careful planning of the meals and explaining to other family members what causes cross contamination, you should see an increase in family members being active participants and assisting in reducing its effects. Cross contamination is the number one concern for those who have celiac disease and have gluten sensitivity. This issue will be with them throughout their entire lifetime. Another issue is staying on the gluten free diet, since many of the foods they liked before they started the gluten free diet they can now no longer eat anymore.

There are some foods that contain some hidden sources of gluten and you need to be aware of them. Below is a list of hidden gluten foods:

Note: Always check with the manufacture to be sure the product is gluten free before buying or consuming.

Resources To Help You

Below are some resources to help you with a gluten free diet and celiac disease. Just click on any image to purchase the Kindle edition. These books are also available in paperback. You have the option on selecting which type to purchase.

Did not find what you were looking for? Enter a search term in the Amazon Box below to search on Amazon for other gluten free products.

Go back to gluten free diet with nutrition home page.