Eating GMO Foods My Not Be Healthy For You! 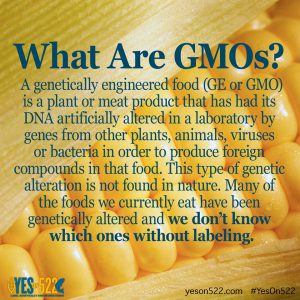 A lot of articles and publications have been printed in books and newspapers informing the public about GMO (Genetically Modified Organism) in foods. A question all individuals here in the United States need to ask   is: are GMO foods healthy and good for consumers to eat? The GMO Food Health Effects will attempt to answer this all important question.

GMOs were introduced into our food supply in 1994 and since then, Americans having chronic illnesses has increased from 7% to 13% in nine years. Food allergies jumped, and disorders such as autism, reproductive disorders, and digestive problems are all on the rise. Why? This is due to the FDA not fully testing these products before releasing them to the public.

By 2003, some 63% of US crops were GMOs. Today this ranges from 75% to 95%, depending upon the food. Once the genetics of the plants have been altered they will contaminate non-GMO plants and the process cannot be reversed.

We will try to provide some health reasons why I think Europe requires all food manufactures to label products containing any GMO ingredients. You are free to draw your own conclusions if eating GMO foods is healthy for you and your family or not.

Just what are some of the health effects or diseases that humans can get by consuming GMO foods? We will provide you with some reasons why you should avoid eating GMO foods.

GMOs are Not Healthy 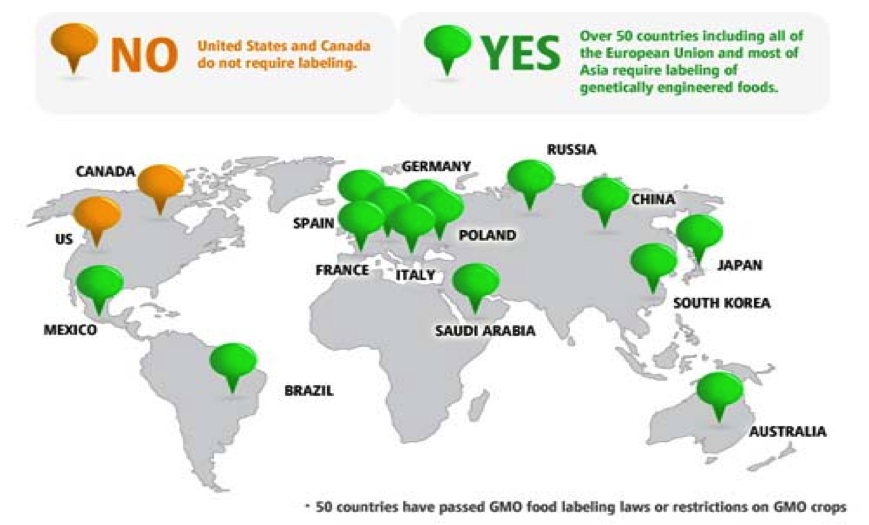 The American Public Health Association and American Nurses Association are among many medical groups that condemn the use of GM (genetically modified) bovine growth hormone because the milk from treated cows has more of the hormone IGF-1 (insulin-like growth factor 1) that has been linked to cancer.

What was found in these studies was that genetically modified (GM) foods can leave material behind inside our body causing some long-term problems. Genes inserted into GM soy can transfer into the DNA of bacteria living inside us, and the toxic insecticide (BT Toxins) produced by GM corn was found in the blood of pregnant women and unborn fetuses.

The American Academy of Environmental Medicine (AAEM) now urges doctors to prescribe non-GMO diets to their patients. The reasons for this are GMO’s may induce organ damage, gastrointestinal and immune system disorders, accelerated aging, and infertility.

The problem with GMO’s is they can cross pollinate and their seeds can travel. It is impossible to fully clean up the contaminated gene pool. The effects of this self-propagating GMO pollution will outlast the effects of global warming and nuclear waste. Another side effect is that organic and non-GMO farmers struggle to keep their crops pure from the cross pollination.

Farmers are now using more of this herbicide every year which can create environmental harm. GMO foods now contain a higher residue of this toxic herbicide. Roundup is linked with sterility, hormone disruption, birth defects, and cancer.

Most GM crops are engineered to be “herbicide tolerant”. Monsanto sells Roundup Ready crops, which are designed to survive application of the Roundup herbicide a weed killer.

The mixing of genes from totally unrelated species unleashes a host of unpredictable side effects. These side effects are not tested by the FDA (Food and Drug Administration). Also, irrespective of the type of genes that are inserted, can result in massive collateral damage that produce new toxins, allergens, carcinogens, and nutritional deficiencies which can cause some serious health problems. 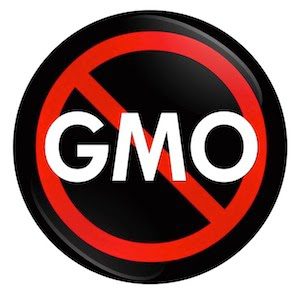 It was discovered that memos made public by a lawsuit show that the overwhelming consensus even among the FDA’s own scientists was that GMO’s can create unpredictable hard-to-detect side effects.

Because of the lack of government oversight the health and environmental risks of GMO’s are ignored by government’s superficial regulations and safety assessments. The FDA doesn’t require a single safety study, labeling of GMO foods, and allows companies to put their GM foods on the market without notifying the agency. The companies maintain that they had no information showing that GM foods were substantially different and safe to be consumed.

Monsanto, a biotech company, told the public that Agent Orange, PCBs, and DDT were safe. We now know that these toxins are not. They are now using the same research to try and convince the public that GMO’s are safe to be consumed. Independent scientists have caught these biotech companies red-handed by demonstrating without doubt how their research is void in finding problems and how they are being distorted or denied by them when confronted with contradictory evidence.

Independent Research Is Attacked and Suppressed

Many scientists who have discovered problems with GMO’s have been attacked, gagged, fired, threatened, and denied funding for research. Many attempts by the media to expose these problems have also been censored to keep this information from the public. It is important to get all of the facts out to the public so they can make a decision on using GMO foods.

GM crops and their associated herbicides can harm birds, insects, amphibians, marine ecosystems, and soil organisms. GM crops are eliminating the habitat of the monarch butterfly, whose populations are down 50% in the United States. Roundup, a herbicide, has been shown to cause birth defects in amphibians, embryonic deaths and endocrine disruptions, and organ damage in animals at low doses. You can just imagine the effects of this herbicide in humans over time.

GMO’s Do Not Increase Yields

The International Assessment of Agricultural Knowledge, Science and Technology for Development (IAASTD) report that was authored by more than 400 scientists and backed by 58 governments, stated that GM crop yields are “highly variable” and in some cases, “yields declined.” They also determined that current GMO’s have nothing to offer to the goal of reducing hunger and poverty, improving nutrition, health and rural livelihoods, and social and environmental sustainability.

It is known that non-GMO agricultural methods used in developing countries have resulted in increased yields of 79% and higher, but GMO’s do not, on average, increase yields at all. This was evident in the Union of Concerned Scientists’ 2009 report Failure to Yield—the definitive study to date on GM crops and yield. 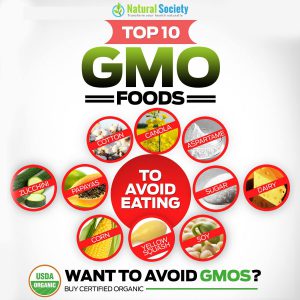 As more Americans become aware of the effects of GMO’s to their health they can achieve a tipping point against GMO’s in the United States. Companies will no longer produce products with GMO’s in them, just like in Europe.

For example, in the United States, a consumer rebellion against GM bovine growth hormone reached a tipping point, kicking the cow drug out of dairy products. Companies like Wal-Mart, Starbucks, Dannon Yopliat, and most American dairies do not have it in their products.

GMO’s provide the consumer no health benefits and just a small number of us that start rejecting the use of these foods, GM ingredients will become a marketing liability and they will be forced to stop making products with GMO’s in them.

What Can I Do

Most importantly, get to know which foods are being injected with the new genes and read the food labels and understand the ingredients that companies are putting in their products. This article will provide you with the most common foods that are being ingested with GMO’s, and the hidden ingredients list to avoid buying the product if they are included as an ingredient.

Because the FDA does not require companies to label their products containing GMOs, it is up to you and me to boycott purchasing these products.

GMO’s are found in about 75 to 95% of the foods listed below. Here are some of the most common foods and products that contain GMO’s in the product:

You can safely consume all of these foods if they are “organic” or the package label says “No GMOs.”

It is estimated that some 30,000 processed foods found in the supermarket shelves contain at least one GMO ingredient.

To counteract the effects of GMO foods, you need to eat organic fresh fruits and vegetables which helps build up your antioxidant network. 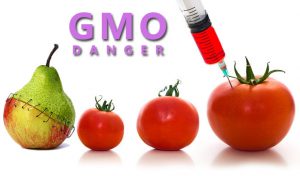 Because many doctors today are telling their patients not to eat foods with GMO’s in them, here are some of the health related problems that have been reported by patients.

The above are probably just a few of the medical symptoms that people are receiving by eating foods containing GMO’s.

Please Note: Each person will display different symptoms when ingesting GMO’s into their diet. Try eliminating GMO’s from their diet and see. In many cases, it may only take a few days or a couple of weeks to notice any changes.

As more and more people become aware of GMO foods, you should also be aware of ingredients that are hidden in the manufacturing of the product. You must carefully read the ingredients on the product label. If any of the following ingredients are found, do not buy the product as it will contain hidden GMO’s.

Below is a complete list of hidden GMO ingredients:

If you purchase any organic foods, they are totally free from GMO’s and you can safely consume them. 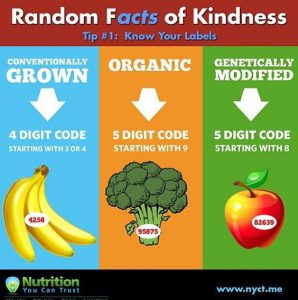 When you go shopping in your local grocery store and buy fresh fruit or vegetables, each food has a sticker on it. Look at the sticker and it has four numbers on it. If it begins with a three (3) or four (4) that product was traditionally grown which may or may not be non-GMO but would have been sprayed with pesticides and herbicides. If the number on the sticker begins a nine (9) it is safe and healthy to consume as it is non-GMO, organic, and not sprayed with pesticides and herbicides and has five digits. If you should see the number begin with eight (8) it is GMO and has 5 digits.

As you can see, I do not believe eating foods containing GMOs is healthy for you and for anyone in your family. GMO foods should be avoided. If the Europeans banned GM foods from their food supply and our U.S. companies are honoring those laws, I think Americans should also avoid eating GMO foods.

By not purchasing GMO foods, you are telling the company that you will not eat the product until they remove GMO’s from it. As more and more Americans become aware of this issue, companies will respond. Until then, your health is in danger and the government is not doing anything about it. But, you the citizen can do something now! Our response: do not buy products that contain GMO’s.

You will become an expert in reading the ingredients printed on the product label. This is the only way you can know if the product contains GMO’s because it’s not clearly labeled on the product. Being aware of the hidden GMO’s, you will see the health of your family improve and will wonder why did I wait so long to change. You may want to print the list of hidden GMO’s in this article for easy reference every time you go to the supermarket.

GMO Resources To Check Out

Go Back to Gluten Free Diet With Nutrition home page.